How creative copywriting can save children’s lives 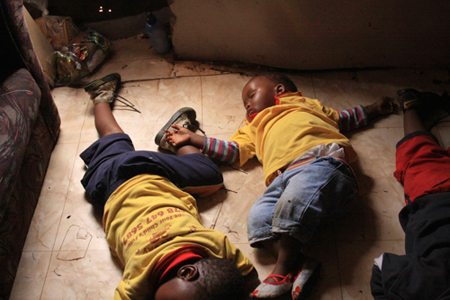 I took this picture in mid-April 2010. These children were asleep on a scrap of discarded linoleum on the red mud of a squatter camp creche in Soweto, South Africa. They were part of Africa’s wealthiest nation. But they scarcely belonged.

There were 32 of them. They clung to life in a humpy the size of a couple of Australian cubby houses. They varied in age from three months to four years. Two of the three-month-olds were already ill with AIDS.

The woman in charge—let’s call her Mvusi—was an illegal refugee from the wreckage of Robert Mugabe’s Zimbabwe. She thought the two little ones might last another week, maybe two. Without money, medicine and little food, they would slip away, unknown, unnoticed, unmarked. Others showed HIV symptoms but had not been diagnosed. Some were already orphans.

My family and I went there to learn at first hand about the plight of more than 1.4 million AIDS orphans and abandoned children in the rainbow nation. Hundreds of thousands live in families headed by children as young as 10 and 12. They are the unluckiest children on earth.

Yet they floored us with smiles as wide as Africa when we gave them each a blanket and some food. Their anthem, Nkosi Sikelele Africa, never sounded more wrenching.

I’m a professional journalist, creative director and copywriter. I’ve worked as a writer in marketing, advertising and PR for more than thirty years, most of it in Australia, but some of it in Africa. The poverty I left behind in Africa in the 1980s was nothing like the wretchedness I’ve just seen. So I’m going back.

Australia has been kind to me and my African-born wife and family. I was born and educated in Australia and will be buried here. When we fled Zimbabwe as economic refugees, Australia embraced us. We set up our own marketing and design studio. It prospered, allowing us to educate our children to tertiary level.

Eighteen months ago, a relative from South Africa visited us in Australia. She detailed the HIV AIDS disaster unfolding in her country. World Vision estimates the number of orphans in sub-Saharan Africa could reach 40 million by 2050. She also told of us her work handing out blankets and food to homeless children begging on the streets of her home town, Johannesburg.

After she left, we brainstormed the issue. It produced an idea. What if we created a currency with a universal value—a currency anyone could make and send from anywhere?

It would have to be simple, but appeal to heart, head and hands.

It would need to have no commercial value by itself, to avoid customs duties and theft.

But combined with others of its kind, it would take on lasting value when given to a child.

We called our idea Knit-a-square. It would ask knitters and crocheters to produce and send 8”/20cm squares to South Africa. There our volunteers would sew them into blankets and distribute them to the poorest orphans and abandoned children.

For it to work, we knew we had to tell the story around the world. And we would have to inspire goodwill and word of mouth. We chose to go online only.

We researched and wrote the copy, sourced the images and launched www.knit-a-square.com in February last year. The search engines began to find us two weeks later.

The cause took over our lives. We gave up our marketing business and sold our investment property to fund working for Knit-a-square full-time. At the same time, we put out appeals for donations and sponsorships from a range of sources—members and their families, trusts, foundations, and churches and corporations around the world.

The last of our investment property money paid for the April exploration to South Africa. We slept on blanket squares. We saw first hand the conditions and the orphans, and met people you would not take for heroes performing miracles with next to nothing.

Those we serve live in destitution, though they are not without pride. Funds will go a long way towards making our operation more streamlined and efficient.

Understandably, Australian individuals and businesses are reluctant to fund a cause which has no direct connection to, or benefit for them.

This brings me to a dilemma. We have done all we can to give Knit-a-square a life. We can say with humility that it is now growing through its own momentum, the love and goodwill of its members, and part time contributions from us. Our last act is to register it as a not-for-profit organisation in South Africa. It will boost our chances of fund-raising there.

But now the money is gone and we must make a living. So I want to make you an offer.

If this story hasn’t persuaded you that I can write, please visit the gallery.  You’ll find samples of my creative campaigns and copywriting.

I ask only that you consider me for your next creative idea or copywriting/editing assignment. If necessary, I’ll do it for you free, on the understanding that if you like the work, you’ll consider me for more.

My ambition is to make enough money to return temporarily to Africa so we can preserve the work and even expand it. Our April trip proved that I could supply creative and copy overnight to Australian creative agencies. 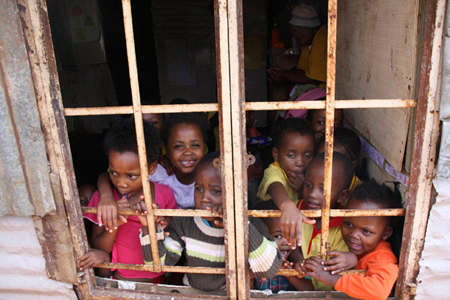